Pilgrimage of St. Ludmila in the Czech Republic was barrier-free

On the occasion of the 1100th anniversary of the death of St. Ludmila, an important pilgrimage and mass took place in Tetín, and we were there.

My mother's name is Ludmila and this year is the year of St. Ludmila. We couldn't miss this celebration.

The first Czech saint initially observed pagan rituals and customs, but eventually accepted her Christianity. She is considered the patron saint of the Czech lands, also of winemakers and grandmothers. Unfortunately, she died a violent death at the instigation of Drahomíra's daughter-in-law due to political and family disputes. Ludmila is said to be very involved in the upbringing of her grandchildren Václav and Boleslav. They strangled her with a scarf so that her blood would not to be shed. 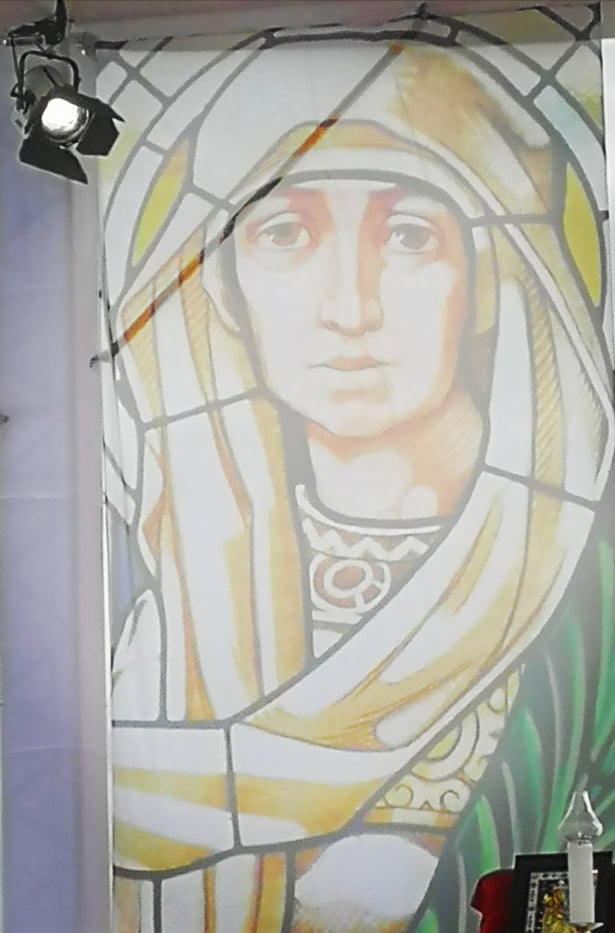 The main event took place in Tetín near the city of Beroun, where Ludmila lived and lost her life in the local castle.

We attended the main program on Saturday.

The police guarded everything around the town of Tetín. An ordinary visitor would not be allowed to come by car to Tetín. There are collective parking lots in the area and a shuttle bus service runs back and forth. Pilgrims can arrive on foot. They released us with a wheelchair sign behind the windshield and sent us to a reserved parking lot for the disabled close to the cemetery. The way there was quite long, but the organizers still guided us in the right direction.

The meadow where the pilgrimage mass took place was a few steps from the parking lot for the disabled. 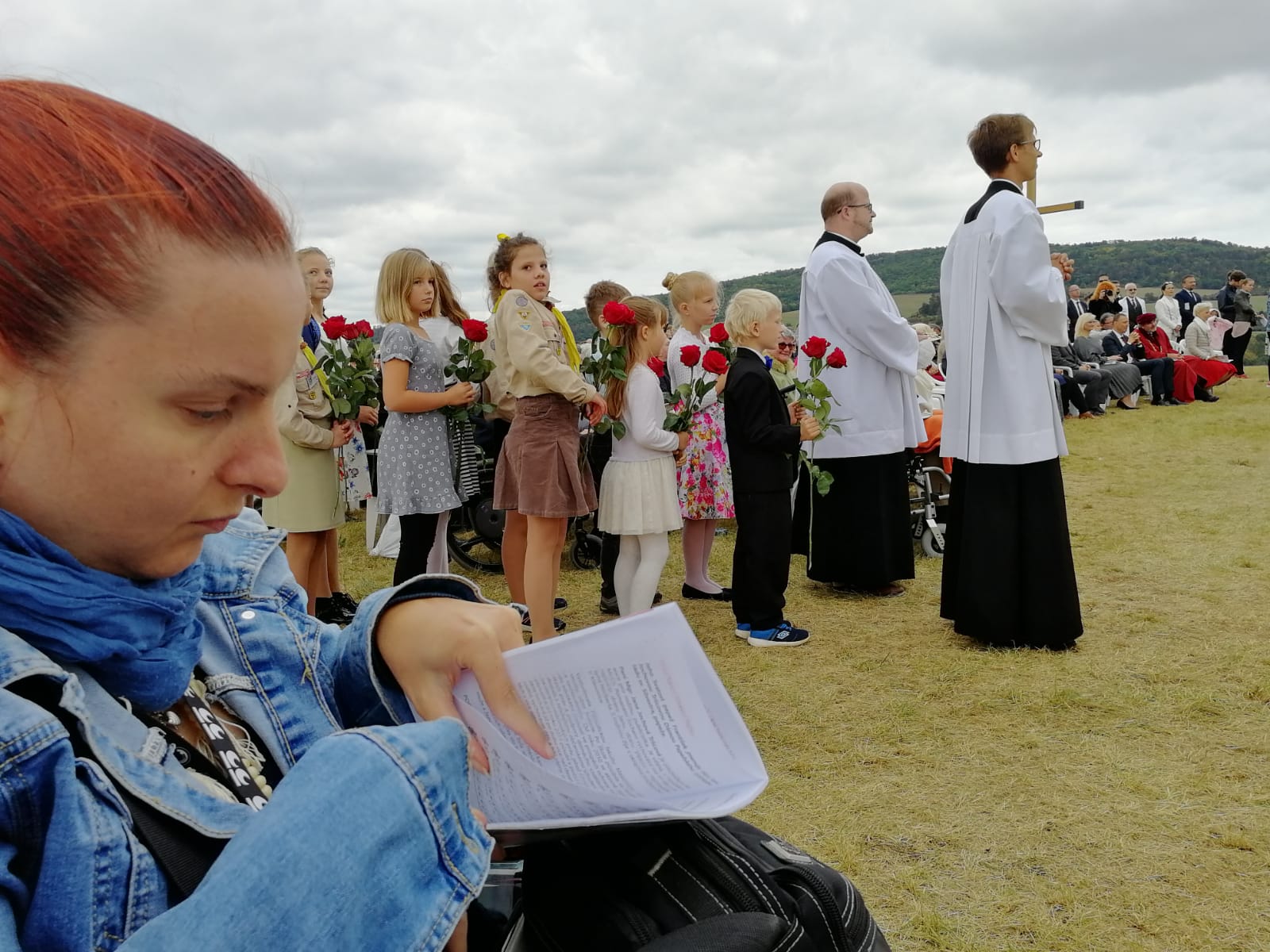 About 3,000 people came to celebrate the uniqueness of St. Ludmila and her importance . My mother and I found a place on the right side of the central isle at the third row. 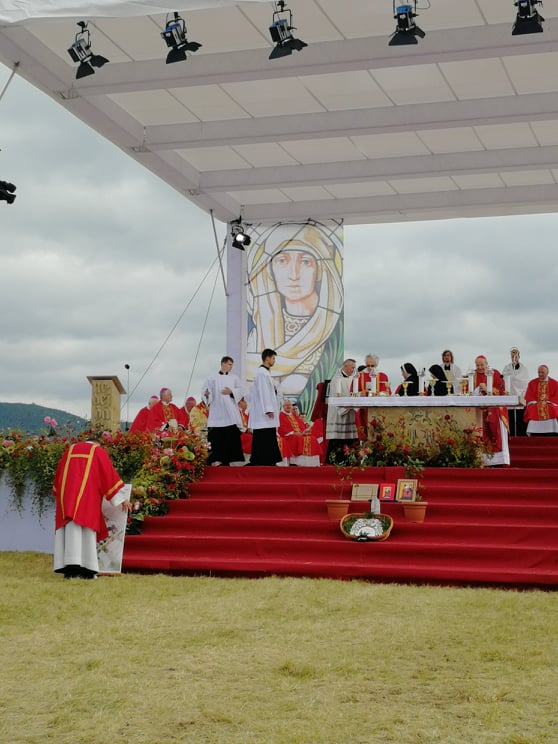 The pilgrimage mass was served by the papal legate Christoph Schönborn. He passed on the greetings from Pope Francis and emphasized the important role that grandparents play in life. Among other things, Cardinal Duka was given space and spoke quite passionately. Finally, the Czech national anthem was played.

The skull of St. Ludmila, who was guarded by little girl scouts and little boy scouts.

After Mass, the program continued in the center of town. We went with the crowd. In the meantime, the skull was transferred to the church of St. Ludmila. Everyone wanted to see her. The queue was really long, but as disabled we were let in as a priority. The entrance was barrier-free and the interior was quite spacious. 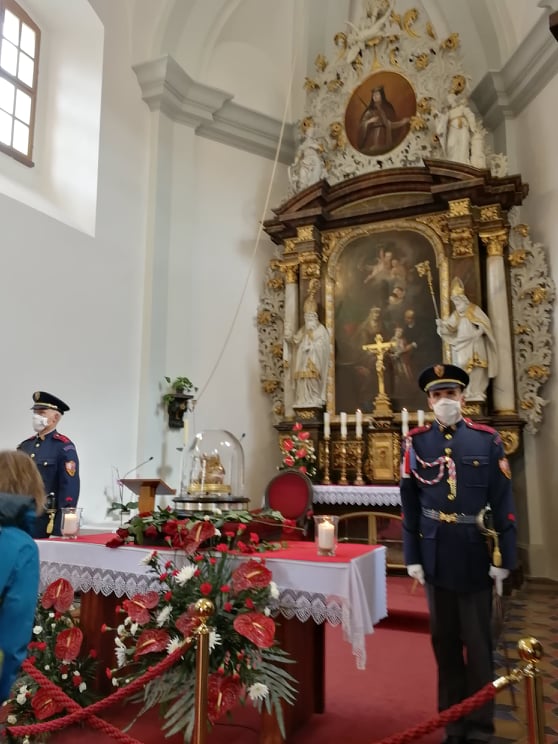 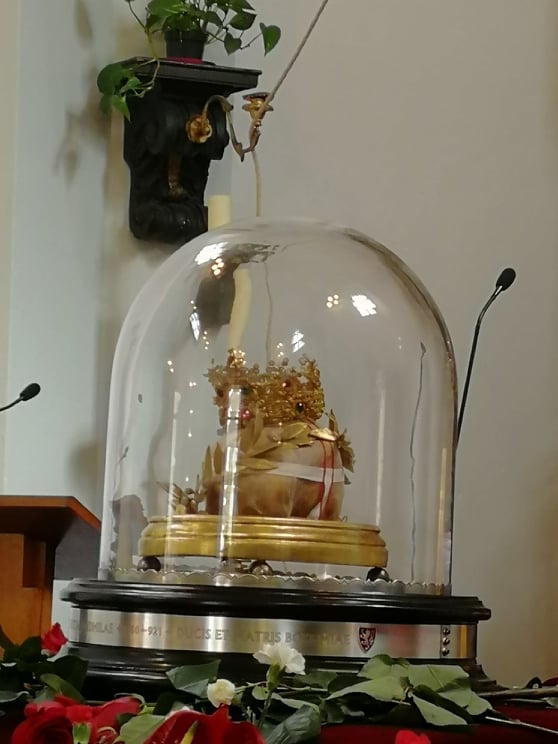 We stayed inside for a while. When Mom and I went out, we stopped by a lookout. My mother also registered at the Ludmila and Bořivoj meeting.

We also did not miss the concert of the band Hradišťan at the church of St. Jan Nepomucký. They were afraid that it might rain during Prayer for Water song, but fortunately it was nice.

My mother and I really enjoyed the event. Thanks, St. Ludmila. Pray for us!